One of my recurring trains of thought during HCMF 2021 was concerned with the notion of continuity. This was, very simply, due to the fact that all of the best things i heard at the festival had an incredibly clear, logical sense running through them that, regardless of their inner complexities – sometimes in spite of them – how one thing led to another always seemed to make complete, convincing sense. Likewise, some of the worst things i heard lacked this, sounding like disjunct fragments bolted together in the vain hope of magical cohesion. 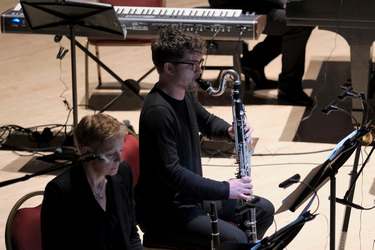 Often, the most telling examples of continuity came in the context of deeply lyrical ideas. A small-scale example of this was The Land Under the Waves by Aileen Sweeney, premièred by Red Note Ensemble. The music grew out of a rising motif, repeated by bass clarinet, developing into a delicate form of fantasia, never straying too far from its main melodic train of thought, but giving it elegant, at times strikingly pretty, treatment. Sweeney’s use of the vibraphone at certain cadence points, changing the speed of the vibration as its notes hung in the air, was especially effective, as was the work’s climactic episode, built on an intense pedal point. James Dillon‘s Emblemata: Carnival took a similarly light and elegant approach to its material, though coloured by a much darker, somewhat melancholic hue. It often seemed somehow aloof and moving at the same time, the former perhaps arising from its rather clunky structure, the latter from its emphasis on soloistic writing, much of which was deeply engrossing, making Huddersfield’s Town Hall feel very small and intimate. However, Dillon also exploited the size of the space in the work’s limited use of electronics, most notably in a mesmerising sequence where tam-tam activity was made to shudder all around us. 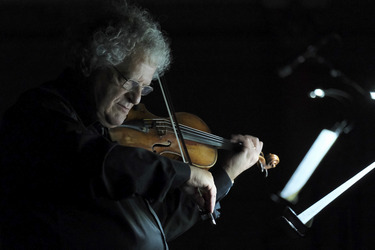 Even stronger was Dillon’s The Freiburg Diptych, given its first UK performance by Irvine Arditti. The first part (‘Drone’) was all about ornament and filigree, an unceasing stream of floridity conveying a deeply honest and (in the best sense) earnestness, as if arising from a deep, unquenchable need to sing. Simple electronics took these (and prerecorded violin) sounds and slowly transported them around the hall, as if carrying them on the breeze. The second part (‘Ghost Stations’) found the violin simpler and possibly sadder, feeling its way in a new environment of crackle and deep resonance, flecked with traces of speech culled from recordings of numbers stations. Though now much more uncertain, that urge to sing continued, almost as if the instrument were afraid to stop, deriving confidence (of a sort) from the act of music-making. 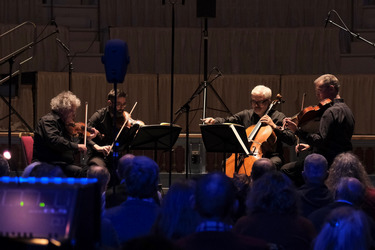 The most sensational use of electronics in the Town Hall was in Natasha Barrett‘s Hidden Values, given a superb presentation that demonstrated a truly wondrous use of space, to the extent that it was as if the hall had become filled with a vast numinous presence. In a similar way to Dillon’s Freiburg Diptych, the music transitioned steadily from gleeful joy towards a much more meditative state, in the process sounding almost less actively “composed” and more the product of natural, but unfathomable, spontaneous processes playing out. It warmed up the space perfectly for Chaya Czernowin‘s HIDDEN that followed, which moved away from Barrett’s stunning clarity into an environment of amorphous uncertainty, where ideas lurked in varying states of shadow. Whereas other works of Czernowin’s heard at this year’s festival (Fast Darkness I: I can see your turned eyes from inside your body and The Fabrication of Light) had displayed a problematically obtuse, even broken, kind of non-cohesion, HIDDEN gelled completely, the Arditti Quartet’s jitter-skitter textures emerging from and dissolving into swathes of almost noise (packed full of detail) and cavernous rumbles. 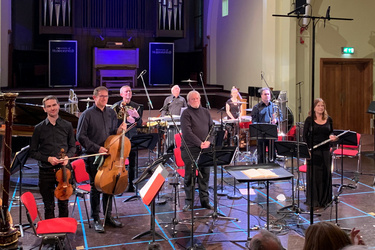 More elaborate forms of lyricism were encountered in the festival’s closing concert given by the London Sinfonietta, conducted by Edmon Colomer. Joan Magrané Figuera‘s Faula was like an extensively decorated line, buried deep beneath all the filigree and spiralling tendrils. Though never opulent, there was something intoxicating about its multi-layered effect, which Figuera only clarified towards the end, gently passing notes between the players. Even more lovely – honestly, one of the most exquisite things i heard during the festival – was Lisa Illean‘s Januaries, which proved how immersive non-demonstrative music can be. For its duration, it was as if the whole world was just this music, resonating out and ruminating over a simultaneously happy yet possibly bittersweet song.

Lyricality was more peripheral in Roberto Gerhard‘s Leo, just one component in a multi-faceted blur of hot-blooded, full-bodied, raging energy. Its defiantly abstract qualities were countered by sudden plunges into tenderness (the piece was composed as a tribute to Gerhard’s wife), violently veering between extremes yet managing to maintain a clear sense of connection between them, bringing to mind the blistering power and oblique beauty of Varése. Though frequently overwhelming, it was absolutely irresistible. 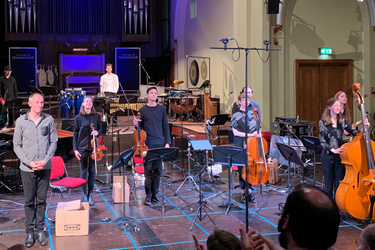 Similarly polarised modes of expression characterised the concert given by Riot Ensemble. At one pole was Bára Gísladóttir, whose Animals of your pasture was rooted in a landscape of complex, rich harmony. “Landscape” seems entirely the right word for music with soaring, intimidating, jagged peaks – covered with a myriad tiny details – interspersed with sparse, arid wilderness. The latter aspect sometimes resembled drone music, though coalescing around multiple suspended tones rather than one; the former occurred as glorious, razor-sharp eruptions and noise surges. Everything about it was elemental, eternal, indomitable. Between poles was the first performance of Whispering c(h)ords, quietly falling by Jenny Hettne, articulated as a tactile, textural drone, gentle but arresting, in a state of continual defocusing and refocusing. Having opened out into a more overtly lyrical language, it subsided back to faint scratches and something akin to a far-off foghorn. Ten minutes of such wonderfully controlled waxing and waning was nowhere near enough.

And then at the opposite pole was Clara Iannotta – whose music i’m beginning to accept that language, even superlatives, is laughably inadequate to do any kind of justice. They left us grief-trees wailing at the wall, receiving its UK première, occupies something of a parallel soundworld to we left her in a sack for fairies to reclaim that i heard at Ultima in September. One of its most beguiling features (a feature, in fact, of most of her music) is the way Iannotta never prolongs or milks a sound, keeping everything moving forward in a way that, considering how ravishingly imaginative her scores are, is both courageous and humble. One minute the piece was vague, nebulous, tentative; somehow it ended up in glowing radiance, which then became tortured; the music sounded like a bruise, emerging as if wounded from an abyssal depth, blurring into a convoluted smear that glided up into something glistening. Always moving, evolving, reforming, all the time establishing a distinct palette (perhaps even a grammar?) for its behaviour. Like the angry, anguished lament of a bloodied fallen angel, the work ended in a strange kind of inverted drone, dark and strong and aching and throbbing. Every single moment of it was literally incredible.