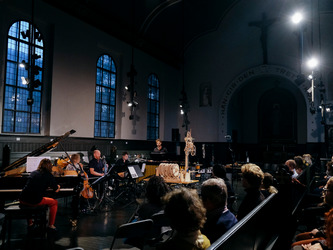 The asamisimasa concert was at its best when at its least extravagant. Apropos: the world première of Orrery Songs by Annesley Black focused upon and revolved around an elaborate hand-cranked and -manipulated bespoke machine at its centre, which for all its apparent convolution turned out to be stunningly unimpressive and underwhelming. It was a fitting metaphor for the composition itself: the only thing worse than its aimless, arbitrary stupidity was its incredible, overblown self-indulgence. From time to time one or two members of the audience chuckled; that’s definitely as much as the piece deserved. Thankfully the other three works in the concert were much more substantial. Mirela Ivičević‘s Exhale Stardust combined extremes of violence and tenderness in such a way that, despite being somewhat faceless and emotionally obtuse, was sufficiently intriguing that it left me wanting to experience it again immediately afterwards.

Occupying a totally different soundworld were two works by Mathias Spahlinger, both of them concerned with the qualities and effects of musical processes. In faux faux faux bourdon this involved the solemn placement of chords, a process threatened by the intrusion of loud accents. It became almost more interesting to watch the ensemble appearing to struggle to hold things together than to follow what the music was actually doing, though of course the two things were inextricably interconnected. At times it seemed cyclic in nature, one of a number of possible realities in this piece that made it mesmerising. In nahe null, the première of which brought the concert to an end, Spahlinger reduced everything to a minimal sequence of very slow, regular chords. On and on they progressed, often with miniscule adjustments to tone colour or harmonic balance and implication; changes like this, or the later introduction of the piano (initially on a single note), came to feel momentous. It was impossible to resolve whether this music was restful or tense, engaging or aloof, active or passive, all of which made the piece the most beguiling enigma of anything i heard during Ultima 2021. 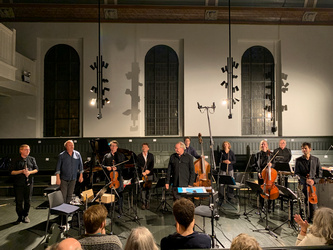 The Cikada concert, which also featured four works, proved to be a deeper and richer experience. Liza Lim’s The Turning Dance of the Bee was something of an exception, quite pretty but rather uninvolving, though it was striking to see the players seemingly trying to outdo each other during its bouts of intense, unstoppable lyricism. Karim Haddad‘s 2001 string trio “… and I have tried to keep them from falling” displayed a kinship to the Spahlinger works: were its drawn-out, slow-moving lines connected or merely adjacent? independent or interdependent? Haddad resolved this early on in an abrupt forceful tutti, though this question was immediately forgotten in the way the music immediately receded, becoming faint, almost octave unisons hovering awkwardly in the space, which was surprisingly moving. Georg Friedrich Haas‘s new work … fließend … was a typically Haasian exercise in infinite acceleration, continually shifting into and beyond new frames of metric reference. Each episode of acceleration moved from emphasising pulse to frantic tremolandi; one wondered if it was a gleeful response to freedom in the wake of lockdowns, running amok at ever more implausible speeds (the equivalent final tempo must have been in the tens of thousands of beats per minute), quivering with nervous excitement and energy.

The highlight of the concert – and one of the standout works of Ultima 2021 – was the first performance of Clara Iannotta‘s we left her in a sack for fairies to reclaim. Wan, shimmering surges projected a metallic sheen with shifting colours, as if the music were moving without moving; into this, unexpected accents added spine-tingling drama, reducing everything to nothing, before flooding the space with light and dark at the same time. This seemed appropriate considering the conflicted nature of the title, suggestive of both the fantastical and the disturbing, though the way Iannotta tapped into the former was especially remarkable, producing a sonic environment of heart-stopping beauty. Often complexity went hand-in-hand with gentleness, teasing out the oblique lyric potential from such an unlikely source as bowed pieces of polystyrene. This was music that didn’t so much make the world stop, as transform the Tøyen Kirke into a world within a world: complete, immersive and genuinely amazing. 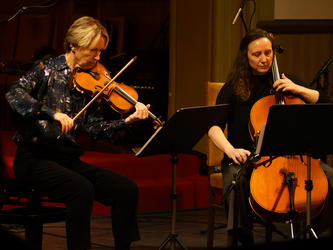 It’s also necessary to reach for superlatives in response to the concert given at the rather more austere Sofienberg Kirke by the combined forces of Norwegian vocal group Song Circus and French ensemble Dedalus. The evening was essentially both an encore and a continuation of their concert from Only Connect 2019, focusing again on music by one of France’s most remarkable composers, Pascale Criton. In Bothsways, violinist Silvia Tarozzi and cellist Deborah Walker were astonishing in the way they made the music flit and cartwheel between ghost-like apparitions of pitch in a delicate maelstrom of skittering and pirouetting gestures, arpeggios, sequences and networks of fleeting figments. There was ever the semblance of a diffracted melody rising half-remembered, half-imagined from a quietly rapid morass of wisps, harmonics and undulations – yet simultaneously, seemingly impossibly, also giving the impression of being static. Hearing Walker perform Chaoscaccia again was like hearing it for the first time, initially tip-toeing with all the force of an insect’s legs before switching to patterns where what we saw her doing with her bow seemed to bear no resemblance to what came out of her instrument: diaphanous shapes, all of them wavering, falling, sliding, colliding. The work’s conclusion melded these two elements into a gorgeous ear orgasm of strange, drawn-out near unisons. 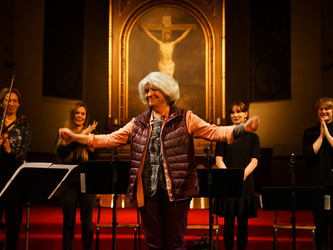 No less impressive was ensemble piece Process, where the players established an environment of sighing tones punctuated by guitar accents and deep, complex muted trombone growls laden with harmonics. The sum total of these actions was a soundworld that left one rapt from the moment it began to when its final evaporation was complete. But the concert was dominated by Soar II, again a work performed by Tarozzi, Walker and Song Circus two years ago, again sounding utterly new. Like a music suspended in time, or which occupies a different field of reference or plane of existence, its movements though glacial were yet always in flux, with slowly shifting not-quite-but-kind-of-almost-unison notes mixed with sighing, breathing and subtle vocal overtones. It gave the impression of an everlasting exhalation, or possibly of simultaneous breaths in and out, like a form of sonic circular breathing. It was a performance that simply beggared belief, impossible to grasp its intricacies, leaving one simply to surrender to its inscrutable marvels, lost in a reverie of bowed, blown, pitched and aspirated friction. Its end felt less like a dissipation than as if it had expanded to occupy the entirety of the space, the limits of the Sofienberg Kirke defined by the limits of the now silent music, enclosing us inside it. So complete was this impression that it didn’t remotely feel as if Soar II had actually finished, but was simply continuing on, imperceptibly, into eternity.