The lack of ostentation in most of the music at this year’s Only Connect festival was perhaps nowhere more conspicuous than in a concert last Saturday devoted to French composer Pascale Criton. Performed by violinist Silvia Tarozzi, cellist Deborah Walker and singers Stine Janvin Joh, Signe Irene Stangborli Time and Liv Runesdatter (members of vocal group Song Circus), the concert featured three works of Criton’s. Two of them were solos, and they highlighted just how elusive is the nature of Criton’s material. In Circle Process, the whole nature of playing the violin wasn’t simply stripped back to its essentials, but sublimated and abstracted, Tarozzi primarily concerned with varying forms of friction, the by-product of scuffing and scraping her instrument. From such pitchless (non-)fundamentals, the piece opened out into a complex semi-focused pitch that, while never really deviating, was nonetheless permanently unstable. Only towards the work’s end did Tarozzi become more demonstrative, but even then her wild gestures were a litany of seemingly static harmonics that soon receded back to the pitchless place from whence they began. The process was somewhat reversed in Chaoscaccia, Walker’s cello setting out in a network of dancing ricochets and groaning pitches that occasionally moved close to forming unisons. Criton undermined the boldness of this opening by pushing the material back into nebulous, abstract territory, Walker giving convoluted articulation to harmonics that, again, were fundamentally static. The work’s conclusion was uncanny, a sequence of crescendos from nothing, each abruptly silenced, as if an unseen presence were directly intervening to cancel things out. 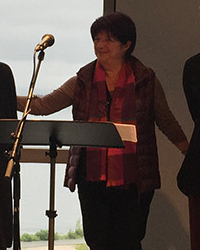 All five performers were involved in Soar II, receiving its world première, and to a large extent the music inhabited a related soundworld to the solo pieces. Close unisons abounded, notes jarring and buzzing in close proximity like same-charged magnetic poles repulsing each other. It was deeply mesmeric, exhibiting an incredible sense of simultaneous tension and rest; yet in almost every other respect the piece was similarly liminal, continuously caught between unison and dissonance, movement and stasis, noise and breath, and at the last, between sound and silence, voices and instruments alike interacting with air to create only the idea of sound, an idea made real in our imaginations. Absolutely stunning.

Music at the opposite end of the the subtlety spectrum was to be heard in Stavanger Concert Hall the previous evening. Presumably put at the very end of a double-bill of concerts given by the Stavanger Symphony Orchestra, conducted by Ilan Volkov, in order to make the evening go out with an obvious bang, Dror Feiler‘s new ‘monodrama’ Epexēgēsis was almost incredible in the naïve way it responded to its politically-charged text by poet Ghayath Almadhoun. It became clear in conversation the following morning that Feiler was seeking to find a way past the ‘immunity’ most of us feel towards images and accounts of atrocity, yet he seemed entirely oblivious to the fact that sonic overload is something to which one can just as easily be completely immune. And not simply because diverse forms of onslaught are pretty common in more radical contemporary music festivals, but taken on its own terms the relentless enormity of the work’s superficial petulance carried all the weight and meaning of a teenage tantrum, becoming all the more boring and unintentionally funny due to the absurd pomposity of its delivery. Aesthetically, Epexēgēsis was extremely welcome, something of an antidote to the calmer consideration and care shown elsewhere during the festival. But its walls of undifferentiated noise (or, at least, multitudes of details rendered indecipherably moot), shrill shrieks from the legend that is Blixa Bargeld and welter of mere activity combined to create the most vacant and enfeebled notion of a musical statement. 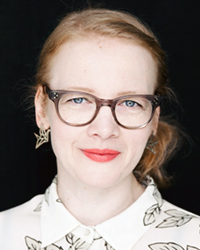 Where Feiler had seemed infantile, Kristine Tjøgersen was charmingly child-like in her orchestral response to nature, Bioluminescence. The piece radiated the best kind of simplicity, expanding into the darkened hall with lights flashing at random from the stage to an enveloping organic environment of delicate instrumental noise. In its evocation of firefly activity, it was perhaps a touch too literal at times, but there was nonetheless something touchingly authentic about its tender, fragile, simple beauty. The same could be said for Naomi Pinnock‘s The Field is Woven, a piece that, as i’ve written previously, articulates a remarkably palpable sense of drama in its careful juxtaposition of chords (bringing to mind the work of Howard Skempton). On this occasion, the consonant-dissonant flexing of the music sounded like breathing, continually tilting between tension and release, a process thrown for the most nuanced of loops when threatening chords emerge and linger, suggesting a harmonic takeover or even a derailing of the entire piece. Though it suffered a little in this performance due to the orchestra evidently trying to keep the dynamics low, this did nothing to inhibit the work’s direct and instinctual power. 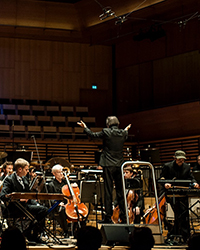 More experimental was the first performance of Lur og dekor – i kvardag og dommedag, a joint project by Norwegian musicians Anders Hana and Morten Joh for retuned guitar/langeleik, vibraphone/bass drum and orchestra. Utilising just intonation, the work’s implementation of pitch was fascinating, particularly in the rough way this was juxtaposed with bristling surface-level activity and percussive interludes. It was tempting to think of it (in the best sense) as something of a ‘mood piece’, yet it always sounded like much more than just the sum of its parts. It was a lot to take in, but on the strength of this first encounter Lur og dekor was clearly a work that deserved and needed to be heard many more times. Though you’d be forgiven for thinking at first glance that Øyvind Torvund‘s Archaic Jam was an exercise in mere playfuless, it was impossible not to be entirely won over by its weird hodgepodge of gestural ideas, many of them begged, borrowed and stolen from well-worn tropes and clichés. In this bizarre new home, those ideas became something completely new, a litany of re-assembled, damaged, half-remembered, recreated and/or imitated remnants of past music stitched into a celebratory fabric that sought to do little more than just revel in the results – which were marvellous. 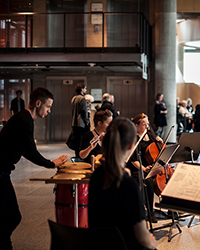 For me, the performance that made the deepest impact of all during this year’s Only Connect was arguably the most nonchalant of them all. Completed in 1971, Christian Wolff‘s Burdocks was performed in the vast foyer of the concert hall on Saturday afternoon, groups of musicians – essentially a ‘supergroup’ of performers from throughout the festival alongside local students – clustered together in disparate parts of the space. It’s almost impossible to describe: there was something unassailable about it, as if the music were brand new yet utterly ancient, even prehistoric, communicated in a language that nobody knew yet everybody understood. Never arbitrary, never calculated, it was almost like a kind of alchemy; a ritual, maybe, but one that always felt unfussy and intensely human and personal. i won’t pretend to comprehend how or why it worked, how its parts so beautifully and effortlessly interconnected, forming an organic web of musical tissue throughout the space, but it was one of the most impossibly convincing musical experiences i can remember. In the most unassuming way imaginable, it seemed enormously profound.

In many ways this performance encapsulated the essence of the 2019 Only Connect festival, where disjunct ideas were consistently thrown together with perhaps only the vaguest idea of what might happen, and where, time after time, the result was pure electricity and magic.