Personality and connection tend to go hand in hand. This is just as true for getting to know a person as it is for getting to know a piece of music: we’re drawn towards or pushed away according to the ways in which its personality – its qualities and characteristics, the way it behaves – is conveyed to us. I was reflecting on this during last Friday’s concert at King’s Place featuring Paul Hillier’s vocal group Theatre of Voices, performing a sequence of choral works from Estonia and Latvia (although titled ‘Baltic Voices’, the concert did not include anything from Lithuania; a work by Rytis Mažulis was dropped from the programme). We heard works by five composers, and it was particularly interesting to note the marked differences in their respective musical personalities – informed in part by their relationship to earlier forms of music – and the effect this had with regard to engaging with and feeling connected to the music.

A context for this was provided by the opening piece on the programme, The Bishop and the Pagan by Veljo Tormis. Detailing the exploits of an ill-fated English missionary’s pilgrimage to Finland in the 12th century, Tormis initially mirrors the age of the story by employing a musical language shaped by the melodic contours of chant and the perfect fifth-laden harmonic strictures of organum. But from the outset it’s clear that Tormis is not engaging in some kind of postmodern exercise in pastiche. If anything, these overt allusions to earlier music turn out to be a ruse, gradually becoming more and more strained and contorted, peppered with obsessive syllabic repetitions, brief garbled asides and startling chord clusters soaring overhead. The result came across not so much as a conflict of musical languages but as both a homage to and an expansion of an earlier idiom, conveying a personality that was both solemn and, here and there, quite tongue-in-cheek. It was easy to connect to music that sounded so personal.

An extreme contrast came in two works by Estonia’s most well-known and above all profitable musical export, Arvo Pärt. Not only in relation to the music by Tormis but, in hindsight, to the entire rest of the concert, Pärt’s Da pacem and Virgencita sounded as if they had practically no personality at all. Of course, from Pärt’s compositional perspective, this is both a complement and, to a large extent, the whole point. The music, after all, is striving not to convey a human personality but to point towards and exist in reverence to Pärt’s conception of an altogether more superhuman personality. One might almost say in Pärt’s music that its personality is its very impersonality, but unless you come from a place of pre-existing agreement with its tenets, it’s hard these days not to hear his musical language as increasingly dull, repetitive, functional and tautological. The flawless performance of these pieces by Theatre of Voices did nothing to alleviate this; it was like staring at the smooth surface of a blank piece of marble.

Galina Grigorjeva’s music in recent years has shown a tendency to go down the same route as Pärt, even on occasions appearing to emulate him fairly directly. Her large-scale 2017 work Vespers (which i wrote about a couple of years ago, following its première at the 2017 Estonian Music Days) features a great deal of this, though not so much in the short movement from the Vespers performed on this occasion, ‘O Virgin Theotikos’, which instead channels mediaeval manners into a highly repetitious, lightly dance-like refrain. Her recorder work Lamento, beautifully performed by Michala Petri, could have done with a larger acoustic than King’s Place possesses in order to allow its melodic tendrils to spill out into the space with a bit more force and resonance. While the work’s faux-Japanese aesthetic felt like a strangely co-opted element into Grigorjeva’s musical language (more an impression than an allusion), the piece was nonetheless attractive, particularly its rapid-fire, birdsong-like outbursts. Despite their surface pleasures, though, neither of these pieces conveyed a convincingly bona fide musical personality; it was tough to connect with them on anything beyond a fairly superficial level.

Pēteris Vasks went deeper. In two settings by poet Czesław Miłosz, Windows and Encounter, Vasks (echoing Tormis) also alluded to the earlier worlds of chant and drone, but instead of expanding them appeared to be slipping sideways into them as if moving between parallel musical universes. This was done so effortlessly that the hundreds of years separating organum from the present day felt reduced to almost nothing. Vasks sometimes shifted between these modes of ancient and modern in a structural way. In Encounter, for example, its freely-roaming, jazz-inflected harmonies became fixed at their cadence points, bringing focus and solemnity to these important textual moments. Everything about this felt impassioned and highly personal, and it was impossible not to be moved by music that forged such a deep connection. 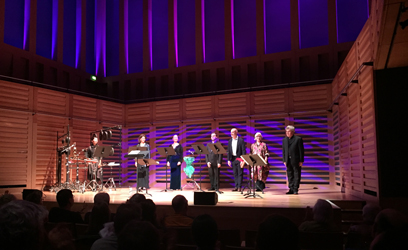 By far the most individual musical personality heard at the concert, though, was Helena Tulve. One of Estonia’s most renowned and original composers, Tulve’s new work The Narrow Road to the Deep North is an hour-long setting of the text of the same name by 17th century Japanese poet Matsuo Bashō. Composed for four voices, recorder and percussion (performed by Ying-Hsueh Cheh), we heard the first performance of a 40-minute excerpt from the piece.

This was the one work in the concert where traces of an earlier music were essentially absent – Tulve even to an extent distancing herself from her own earlier vocal works. In particular, the lush harmonic immersion that characterised pieces such as Reyah hadas ‘ala (2005), I Am a River (2009) and You and I (2017) was here replaced by an altogether more ascetic, even somewhat abstruse language that invited comparisons in terms of character (though not material) with Benjamin Britten’s church parables. The piece could be said to have not just one but two personalities: one austere, the other florid, together establishing a heightened atmosphere that, while the performance did not extend to physical or theatrical elements, nonetheless had something of the intensity of a rite. This balance of musical personalities turned out to be crucial. Bashō’s text (sung in English) has similarly binary characteristics, melding the prosaic and the poetic in its articulation of his journey to Honshū.

The work’s essential behaviour, in keeping with that aforementioned atmosphere of a rite, was somewhat static and, in every sense of the word, timeless. Tulve’s writing often created complex paradoxes: there was a recurring sensation that the quartet of voices were tethered yet simultaneously able to move freely, mirrored in Tulve’s use of the recorder and percussion. Even more engrossing was a passage where the voices each appeared to be doing the same thing (or, at least, heading in the same direction) completely independently in such a way that it blurred the line between soloistic and four-part writing. One of the most memorable aspects of the piece, though, was Tulve’s treatment of its series of haiku refrains, sung in Japanese. Here a third personality emerged: disorienting, even a bit baffling, so heightened in tone that it sounded positively uncanny, as if the singers were casting a spell.

Considering these qualities, The Narrow Road to the Deep North could have proved difficult to connect with. Yet the opposite was true; Bashō’s narrative has found a perfect counterpart in Tulve’s music: formal yet personal, indifferent yet intimate, placid yet passionate. It was a mesmerising performance, one that could have gone on forever. Considering the complete hour-long work consists of only the first half of Bashō’s text, there’s scope for Tulve to continue with this project: maybe one day we’ll be able to spend an entire evening connected to and deeply immersed in its evocative and uniquely-charged world.