Being the host nation, music from Norway was especially well-represented at this year’s Nordic Music Days in Bodø. Harnessing the large and impressive organ of Bodø Cathedral, Trond Kverno‘s Triptychon 2 was one of the fieriest things i heard at the festival. We tend to think of toccatas as fast-flowing, though the ones that appeared here were often crushingly strong, to the point that it sounded as if their notes were audibly fusing into dense clusters. Its more ruminative middle movement only made the powerful outer sections sound more assertive, the final movement managing to turn a pedal point into an aggressive surge before letting high notes hang while the pedals became pushy in the depths. And just when it seemed the work couldn’t get any more forceful, organist Gro Bergrabb’s rendition of the final climax was so crashing it practically threatened the integrity of the building. 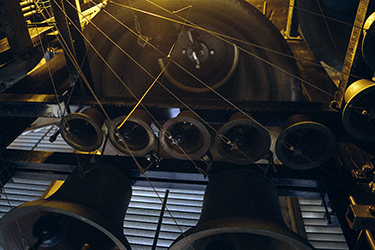 The only piece i was able to hear on more than one occasion (an all too rare treat at new music festivals) took place just a literal hop and a skip from the Cathedral, in the separate bell tower containing its carillon. Here, The Sacredness of Trees by US/Dutch/Norway-based composer Ellen Lindquist was performed by organist Vegar Sandholt on four occasions, two of which effectively became the start of my day. Lasting around eight minutes, the piece was a concise workout for the instrument, moving between thoughtful episodes where each note seemed to be lingered over and exuberant torrents. A blurring of major and minor implied tonalities was a recurring feature, which took a bit of mental adjustment to get used to as we’re generally accustomed to bells being part of a relatively small diatonic set, whereas the Bodø carillon has a four-octave chromatic range. The climax was very effective, another burst of rapid filigree work underpinned by a deep regular tolling that gave the impression the piece was chiming the hour, before the work ended by ascending into the carillon’s highest reaches. Hearing The Sacredness of Trees first thing in the morning was a wonderfully refreshing way to get the day up and running.

Natasha Barrett‘s latest electronic work Involuntary expression took as its starting point the tiny physical movements of people in different situations. It’s always a delight to be immersed in Barrett’s music, and one of the most beguiling things this time was the way it often felt elusive, not particularly fast-moving yet nonetheless sounding out of reach or beyond our grasp. Not always of course; among the most memorable moments of the piece were some wonderfully tactile episodes of pure squelch, all the more curious in the way they appeared rooted in reality yet at the same time almost entirely removed from it. Its most delicate passages were no less absorbing, especially whispers thrown around the speakers that turned into an extended sequence of pitch and noise, as if an exhalation were being scrutinised at great length and depth. One listen to a work of Barrett’s is never remotely enough, so i’m impatient for an opportunity to hear Involuntary expression again. 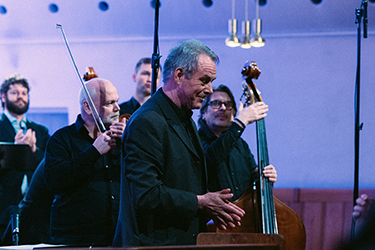 One of the Norwegian composers who’s impressed me most (both in concert and on CD) in the last couple of years is Nils Henrik Asheim. A composer whose imagination seems to know no bounds, his 2018 work for choir and strings Muohta – which won last year’s Nordic Council Music Prize – takes as inspiration words for ‘snow’ in the Sámi language. Asheim uses no fewer than 18 different snow-related words as the basis for the work’s sections, exploring their rich definitions, including ‘čađgit’ (first light, scattered snowflakes before snowfall), ‘časttas’ (relatively small wave-shaped snow caused by wind), ‘goahpálat’ (moist snow that clings to clothes) and ‘skárta’ (thin, ice-like snow on the ground, frozen into lichen and moss). In practice Muohta didn’t sound anywhere near as sectional as that description suggests, instead coming across as a multifaceted but cohesive work exploring a wide range of distinct kinds of musical behaviour. Furthermore, performed in Bodø Cathedral by the combined forces of Vocal Art and the Arctic Philharmonic Chamber Orchestra, on many occasions Muohta transcended the limits of what we would conventionally describe as ‘song’ or even ‘music’ – it became something like an epic folk ritual, a summoning or invoking of elemental forces of nature through the heightened and heavily stylised articulation of these words, like the slow, long-form casting of a spell. It’s a work i’d very much like to write about in more depth at a later date, as there’s so much to say about it, but of all its welter of unforgettable moments one of the most remarkable was its opening and recapitulated closing, soft repeating chords so delicate and poised it made me self-conscious for even breathing. i, the music, and even time itself all seemed to want to freeze solid. Amazing. 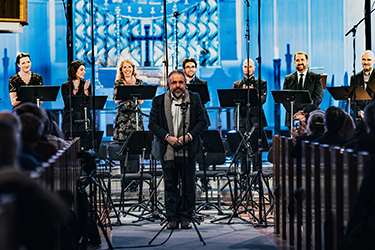 The most outstanding music i heard at NMD 2019 came from the most remote geographical regions. Faroese composer Sunleif Rasmussen‘s 3 Organ Chorales – In Memoriam Kjartan Hoydal were striking enough – particularly the last of them, in which the shimmer of a semitone clash was explored for both its harmonic and colouration potential, being developed brilliantly organically – but his 5 Færøske sange (5 Faroese songs) were marvellous. Performed by Vocal Art at the same concert as the Asheim, the musical language of the songs, though not ground-breaking, was highly individual and very moving. At times it brought to mind the choral works of Icelandic composer Þorkell Sigurbjörnsson in the poignant twists of its harmony, venturing into dark, searching territory that in the second song became so strange the music sounded as if it had been physically stunned. It was unpredictable too; in the fourth song, Rasmussen caused everything to abruptly stop, holding the notes in place before slowly smearing them outwards. It was mesmerising, crowned by a remarkable final song which blew hot and cold with bold intensity. It left me wanting to spend time with a lot more of Rasmussen’s music. 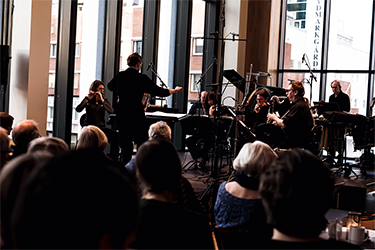 And then there was Iceland, whose featured composers, to my mind, demonstrated the most breathtaking musical imagination of all. It was good to hear Anna Thorvaldsdottir‘s Ró again, given an arresting performance by Cikada that managed to make the material sound both tangible yet difficult to fully parse. In particular, the way the work’s drones yield to periods of vaporous drift was extremely effective, and it was exciting to hear how, even as the music began to coalesce again, its nature remained alien and unidentifiable. Bodø Cathedral organist Gro Bergrabb got the opportunity to let rip again in Hildigunnur Rúnarsdóttir‘s Konan og drekinn (The woman and the dragon), a triptych inspired by passages from the Biblical book of Revelation. It effectively began in medias res, at the outset throwing us headlong into high drama. In some respects its soundworld was redolent of more conventional organ music, yet its language was harmonically rich, and the melodic writing in its lyrical middle movement was extremely beautiful and at times nicely erratic. 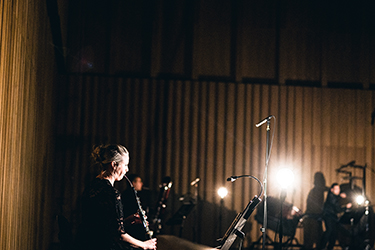 “A conduit; an entity channels and relays a connection unfolding in real time. The appearance of sway, the emerging of new growth.” These were the words with which Bergrún Snæbjörnsdóttir introduced her work for seven performers and lights Areolae Undant, receiving its Norwegian première at the final concert of the festival by Esbjerg Ensemble. On the one hand, there was something bleak, even harsh, about the musical landscape it inhabited (hardly unusual for an Icelandic composer), the players arranged at the edges of the stage, articulating a mixture of low register textural noises and squally overtones and multiphonics. Often this happened in complete darkness, the work being haphazardly lit by a collection of intermittently flashing lights. Yet on the other hand, its actual and figurative blackness was surprisingly inviting, offering access to a sonic space where things were being fashioned in a completely new way. It felt amorphous, nascent, like a sonic equivalent of the embryonic mush in a chrysalis, in the process of becoming something new, the lights an accompanying bioluminescence. 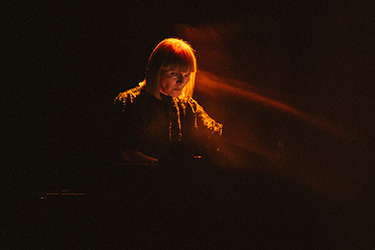 But the work that dazzled and entranced me most, leaving me literally gasping at its end, was LUCID, and that was despite the fact we only heard an excerpt of it. Composed by Þóranna Björnsdóttir in collaboration with Federico Placidi, the full version of LUCID lasts around an hour, of which we heard a 20-minute distillation performed by Þóranna (Placidi was unable to attend) on the opening night of the festival. The work combines field recordings collected in Iceland which have been extensively reworked to become part of a massive acousmatic sound sculpture. So while it often sounded natural or organic, it was never remotely transparent – indeed, LUCID was in many respects highly abstract and an obvious product of (non-synthetic) artifice, like an in-depth reinterpretation and reorganisation of nature. All of this constituted multiple layers or strata above a more ambient-like core – formed in part by Þóranna’s singing – that contrasted with their earthy, gritty energy by being smooth and ostensibly stable. Yet over time this apparent division between core and surface shifted, now resembling two discrete elements that coexisted, both separate from and superimposed on each other. Performed in the Stormen concert house’s more intimate space Sinus, LUCID was staggeringly vivid, and so intense it caused the room and all of our bodies to shake in sympathetic resonance with its primordial power. It was like bathing in raw, all-enveloping energy. WOW.