As i mentioned previously, allusions to or evocations of nature were few and far between at this year’s Dark Music Days, indicating the strength and diversity of Iceland’s more searching, abstract approach to composition.

This seemed to be precisely the point of Sigurður Árni Jónsson’s Illusion of Explanatory Depth, premièred by the Iceland Symphony Orchestra conducted by Bjarni Frímann Bjarnason as part of ‘Yrkja’, an annual programme to support up-and-coming composers. More than most works I heard at this year’s festival, the piece was clearly all ‘about’ sound itself, articulated via an involving conversation between sections of the orchestra. It was exceptionally dynamic, fluctuating between overblown bursts of pseudo-romantic passion – principally heard in a short, recurring motif – and extended sequences of exploratory convolution. Over time, the orchestra never idling for a second, it created the distinct sense of an intense inner turmoil, governed by spontaneity – yet this sense was regularly challenged by that uncanny recurring motif. A fascinating piece. The same couldn’t be said for the other ‘Yrkja’ work, Lo and Behold by Eygló Höskuldsdóttir Viborg. Nominally taking inspiration from Werner Herzog, the piece was a pure slice of the kind of saccharine fare one is forced to endure throughout pretty much any nature documentary these days. It’s hard to find musical aspirations such as these admirable, particularly when they’re so overtly manipulative; it was like being continually poked: “be uplifted, be amazed, be joyful, be happy”. NO. 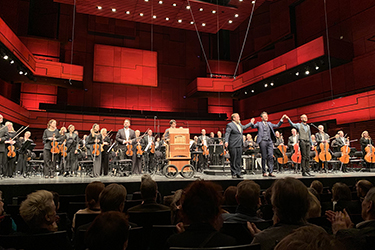 Similarly abstract attitudes were especially noticeable in the Thursday evening concert also given by the Iceland Symphony Orchestra, this time conducted by Daníel Bjarnason. Last year, nature had been a recurring theme at this event, but this time things could hardly have been more different. Two concertos were premièred. The first, Snorri Sigfús Birgisson’s Concerto for Orchestra, was a somewhat strange affair, continually seeming to be looking back to styles and manners from an earlier time though without ever quoting or copying. Its first movement was the most engaging due to its relative simplicity: all harmony, like a never-ending sequence of potential cadences yet never exactly resting or resolving. While Hugi Guðmundsson’s new accordion concerto BOX more directly featured earlier music – in the form of a hand-cranked barrel organ – it acted as something of a foil to the rest of the work’s material. The latter initially took the shape of a deep brooding melody with string and harp glitter strewn across it, a lyricism that ultimate broke down into vague motivic textures. The role of the organ was catalytic; with slight theatricality, soloist Andreas Borregaard became sufficiently intrigued by the instrument (positioned at the front of the stage) that he abandoned what he was doing with the orchestra – essentially giving up on it, as if having decided that particular musical argument was going nowhere – and walking over to explore it. His interactions with the organ served as both inspiration and discouragement, sometimes firing up light, quasi-minimalistic impulses that dissolved into oom-pah cheerfulness, other times leading to strange agglomerations of magic and scrunch, so remarkable I found myself stopping breathing numerous times. Yet the organ inevitably and repeatedly misfired and went awry, disrupting both soloist and orchestra such that it posed interesting questions about the role and relationship of outside influences, presented in the most amusing, charming way.

By contrast, Bára Gísladóttir’s ÓS was an unengaging, impenetrable miniature mess of clichés, but concert opener Hjakk, by one of Iceland’s great musical figures Atli Heimir Sveinsson (who died last year) was unforgettable. An essay in textural minimalism, not so much exploring harmony as differing levels of density, the work proceeds over a never-ceasing, never-slowing motoric pulse. What made the work so engrossing was how difficult it was to read the nature of this momentum and the music’s concomitant tone and implied motivations: was it a glorious, triumphal paean-anthem? or was it a sinister, oppressive machine? This positive-negative obfuscation, forever teetering between exuberance and bellicosity, was riveting, and every day since it’s returned to my mind, and I’m still continuing to wrangle with it. 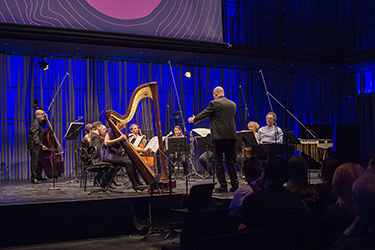 Another work caught in this kind of balance was Haukur Tómasson’s Nature Morte, receiving its world première by the Reykjavík Chamber Orchestra at the final concert of the festival. Like a single idea that had been atomised around the players, it coalesced into something bifurcated: warm and accessible, bright and clear, yet at the same time elusive, distant and fleeting; it was like grains of diamond dust slipping through the fingers. The implied liminality of the work’s title (usually rendered in English as ‘still life’) could be heard in an underlying paradox, Haukur’s material veering between tangibility and tremulous effervescence. A fabulous piece from one of Iceland’s most playful composers.

As is so often the case, though, the most telling performances were to be found in smaller-scale, chamber events. The most still and focused of them was Mads Emil Dreyer’s Vidder 1, receiving its first performance in Iceland by EKKI MINNA Duo. The sustained tones from accordion and cello sounded like achingly slow breathing, but with each inhalation merging into the following exhalation, and vice versa, resulting in something like an instrumental circular breathing. Slowly shifting and overlapping, always falling somewhere mysteriously between consonance and dissonance (at no point did it really feel like either), it was ravishingly beautiful. 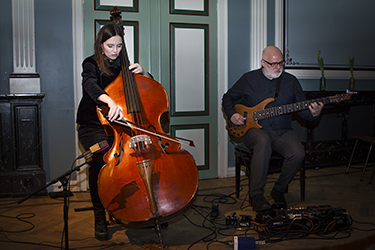 On the one hand, what we heard in the first five minutes of improvisations by Bára Gísladóttir (double bass) & Skúli Sverrisson (bass guitar) was essentially identical to the 55 minutes that followed. Indeed, it would be exaggerating to describe it in any meaningful sense as a ‘dialogue’ between the two, since each was so confined to their respective role: Skúli providing harmonic direction and shape, Bára contributing skittering detail on top and within. Yet on the other hand, the way their combined soundworld conjured up a Lynchian darkness – as well as evoking Jóhann Jóhannsson’s incredible soundtrack to Panos Cosmatos’ Mandy (which prominently features Skúli’s guitar work) – kept the performance compelling.

Looking back at my time in Iceland, as I’ve indicated the music tended either to focus on notions associated with nature (a few) or abstract ideas (many). The works that made the strongest impression of all, though, were those that, whichever way they went, opted to convey something more deeply personal. I’ve previously mentioned perhaps the most brilliant of these, Birgit Djupedal’s I am not welcome, but at the same concert given by soprano Heiða Árnadóttir there was another such piece being premièred, Þóranna Dögg Björnsdóttir’s Þá birtist sjálfið. 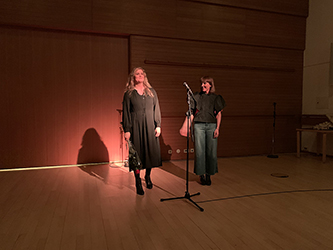 That title literally translates as ‘then the self appears’, but the English title provided was rather more revealing: ‘Prayer to Self’. The text is a succinct, poetic adjuration, one that doesn’t flinch from certain perceived necessities: “be a cold and clear thought / from your arctic plains / of wisdom and / strike me, punch me / cause I need it”. The first half of the work comprised a multi-channel explosion of pre-recorded gestural vocal sounds, heard as Heiða solemnly climbed the stairs of the Nordic House, slowly moving through the library to arrive in the main performance space. This disconcerting opening was answered by an altogether more transcendent second half: first speech, then chant-like singing, simple, measured, controlled but heartfelt, ultimately becoming caught up and expanded through a dense but detailed electronic soundscape. There were some distinct echoes here of Þóranna’s collaborative work LUCID, which was my best album of 2019, and Þá birtist sjálfið was similarly stunning. At once mesmerising, gorgeous and intimate, the only word I could utter following Heiða’s performance was simply “wow”. Amazing.

[…] by the music of Icelandic composer and performer Bára Gísladóttir. First contact was at the Dark Music Days in 2020, when i saw her in action with Skúli Sverrisson, forming a complex double bass / electric bass […]