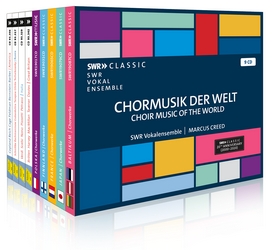 For the last six years, the SWR Vokalensemble and conductor Marcus Creed have been on a systematic journey through choral music from all points of the globe. It’s a journey i wasn’t aware of until earlier this year, when a large box set unexpectedly arrived at my door, ambitiously titled ‘Chormusik der Welt’, containing the entirety of this journey on nine CDs. Thus far, the group has explored music from America, Russia, Italy, Great Britain, Poland, Finland, France and Japan, concluding with a final disc, released earlier this year, titled Baltikum, turning their attention to works from Latvia, Lithuania and Estonia. At around 10½ hours of music in total, i’m still working my way through these discs (America is boring; Russia is excellent), but the fact that this collection has now been boxed up suggests that Baltikum marks the end of this globe-trotting series. If so, it’s a pretty fabulous way to finish; of the seven works featured on the disc, almost all of them attain some kind of breathless magic.

Canon solus by Lithuanian Rytis Mažulis is something of an exception, opting to set the trinitarian doxology as a harmonically fixed series of overlapping waves which, though quite interesting, quickly sound dry and a bit drab (though for these same reasons it would no doubt be perfectly fitting for liturgical use). The two Estonian offerings – Veljo Tormis‘ Two Songs after Ernst Erro and Arvo Pärt‘s And I heard a voice… – are pleasant enough but, in contrast to the rest of the album, seem rather parochial. (It’s a shame SWR Vokalensemble didn’t pick younger composers to represent the country here, as their choral music is very much more inventive and invigorating.) That being said, the folk-like lilting and the jangling, almost uproarious intermingling of the voices in the Tormis lend the songs a potent and endearing sense of rural community music, imbuing them with a special kind of authenticity. Pärt just sounds like Pärt, of course – same old, same old – though it’s nice to hear him actually setting words in his native tongue for once.

The piece that left me most conflicted was the Four Madrigals by E. E. Cummings, by Latvian Andris Dzenītis. It’s a brave composer to seek to do justice to the overwhelming infinitude of Cummings’ poetry, and in two of the madrigals, ‘i carry your heart’ and ‘may i …’, i found myself squirming at their tendency towards the prosaic. To be fair, the former of those two acquits itself much better at its beginning and end, but in any case, the first and last madrigals are way more convincing. The final one, in particular, ‘who are you?’ turns the choir into a collection of semi-frozen points of pitch hanging in space to form scrumptious clusters, simultaneously conveying both wonder and curiosity, and made more personal in a number of brief, soaring solos. 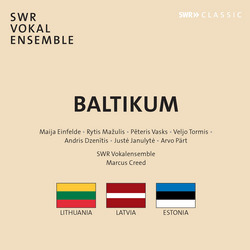 Similarly scrunchy is Plonge by Lithuanian Justė Janulytė. It’s a deliberately hypnotic piece, setting a couple of lines from Baudelaire’s short poem L’Avertisseur (The Warner, included in his Nouvelle Fleurs du mal) that speak of “Plunge your eyes into the staring eyes of satyresses or nixes…”. Combining 12 voices with a solo cello (performed here by Séverine Ballon), Janulytė sets up a never-ending panoply of mesmerically-shifting harmonic colours. Baudelaire’s text is exploring a tension in humanity between our desires and an inner “yellow Serpent” that continually takes issue with this. i love the way that, in both the title and the use of just these two lines – thereby lacking the subsequent retort from the Serpent – Janulytė focuses on the rapture of giving in to desire. Like Odysseus confronted by the sirens, it’s impossible to turn away, we become lost in the continual stream of gentle glory washing over us, and pulling us in.

At the opposite end of the emotional spectrum is Litene by arguably Latvia’s most renowned composer, Pēteris Vasks. It’s not often one hears choral music that projects a kind of white-hot rage, but that’s precisely what’s captured in the 10 minutes of this two-movement work. Drawing on words by Uldis Bērziņš, the piece alludes to the titular village where, during the Soviet occupation of Latvia, many soldiers were arrested and either summarily executed or shipped off to Siberia where most of them died. The musical language here, rather different from the lushness that often permeates Vasks’ work, is a complex product of aleatoric techniques. In the first part it emerges as a form of lullaby, but which erupts two-thirds through into a rabble of accusatory outrage: “O, Litene! O, liar! O, insane betrayal!”. The same attitude is picked up in part two, now driven along at speed; the outbursts here, coming as the climax of a series of turbulent crescendos, are blood-chilling – yet even more is the voices’ subsequent collapse into angry mayhem, dark hubbub and ethereal, seemingly unhinged cries and whispers: “The boy in me cries and dies / The beast in me roars and shits”. Despite – or, perhaps, because of – its brevity, Litene is in every sense of the word stunning; each time i’ve listened to Baltikum i’ve had to pause after this piece before continuing, as it’s such a lot to take in. SWR Vokalensemble’s singing is impeccable throughout, but the way they tap into the necessary mindset here is remarkable.

Perhaps most impressive of all are the Three Poems by Fricis Bārda by Latvian Maija Einfelde. Bārda’s texts employ some marvellous inverted metaphors: in ‘Evening’, darkness sings and shines; in ‘Heaven’, down becomes up as we, instead of ascending, “fall and sink” into a whirlpool that carries us to the stars. Both of these refer to the stars – points of light in an otherwise dark and possibly forbidding place – and Einfelde’s response to them is steady, even a touch ponderous, yet ultimately transcendent. ‘Evening’ finds the choir almost huddled together against the cold, moving slowly but unstoppably toward star-filled blackness, and through that into the world of dreams. There’s the impression here of a music delicately rocking itself to sleep. In between is ‘Prayer’, a secular adjuration for both personal and universal security and comfort, one that, again, emphasises light, though here in the form of daylight: “Let not the earth feel pain when I tread on it … and let not a single soul, if that be possible, be without sunshine”. Here, as in the other songs, the choir moves as one, individual voices occasionally taking turns to point the way forward or tease out ruminations. The passion in this prayer is palpable, not only due to the choral unity but in the pair of brief climactic surges that bespeak just how earnestly these words are being uttered. ‘Heaven’ initially seems to be breaking away somewhat from the mellifluous nature of the preceding songs, extolling the virtues of the heavens with rapid excitement. Yet the voices soon coalesce back into a super-rich agglomeration, evoking both the harmonic simplicity of hymns as well as dense clusters of compacted radiance. Einfelde turns Bārda’s “whirlpool” into a veritable wormhole, transporting us (down or up) into another realm of heady elation, where the music becomes semi-static, the singers now seemingly held in place due to an intoxicated combination of bliss and wonderment.

Baltikum is easily one of 2020’s most outstanding choral releases, one that, in addition to exploring ineffable heights, has the courage to plumb unfathomable depths. Furthermore it’s a fantastic demonstration showcasing what SWR Vokalensemble are capable of in material that, both musically and emotionally, is highly challenging. (i’m going to have to get back to that box set ASAP.)

Released by SWR Classic earlier this year, Baltikum is available on CD and download, and the 9-disc Chormusik der Welt boxset, which includes Baltikum, is still available and exceptionally good value. One important point, however: the booklets accompanying these discs only include German translations of the sung texts, not English. This obviously isn’t a problem if the original text happens to be in English (or if you understand German) but that doesn’t occur very often, so be prepared to find yourself scouring the web (or turning to translation tools) in order to understand the texts. It’s a disappointing omission from what are otherwise excellent recordings.