Xiaogang Ye – Mount E’mei; Winter; The Song of the Earth 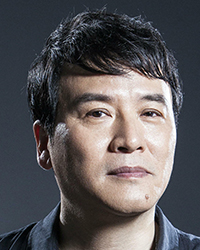 Five years ago i was getting excited by an album of orchestral music by a Chinese composer previously unknown to me, Xiaogang Ye. That excitement has been rekindled recently by the coincidentally-timed release of three new albums of Ye’s music in the last few weeks, which together provide an excellent in-depth exploration of his more recent orchestral output. When discussing the earlier album – the 2016 release of Ye’s Symphony No. 3 and violin concerto The Last Paradise – i remarked how it was “impressive to encounter such extremes of brute force and delicacy handled so deftly…”, and this also applies to the works on these new discs.

Contemporary music from China (well, perhaps all music from China (and, indeed, performances i’ve experienced of western music by Chinese orchestras)) has a tendency to be coated in an oleaginous layer of ultra-sweet syrupy sugar, and while Ye’s music isn’t entirely immune to this, for the most part he steers well clear of such excesses in favour of more complex and meaningful forms of lyricism. i should perhaps immediately qualify this by saying that Ye’s work neither sounds deliberately “westernised” – stylistically, it’s quite different from the majority of European music – nor is it overtly “Chinese” in the sense of being entrenched in the country’s plethora of well-worn musical tropes, modes and idioms (and, for that matter, instruments – though Ye does sometimes incorporate them). This ‘roaming’ quality – liberally hinting at and speaking to and beyond both East and West, resulting in an opulent but ambiguous form of post-romanticism – is an intriguing, often beguiling aspect of Ye’s music, but a more defining attribute is the way he fashions his work to attain the maximum arresting effect. While spending time with these new albums, i’ve lost count of the number of times i felt stopped in my tracks, marvelling either at the unusual combination of sounds i was hearing or at the completely unexpected direction the music had suddenly taken. 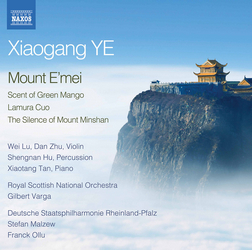 The three discs contain a mixture of orchestral, concertante and vocal works, the majority of which date from the last decade. The first, released by Naxos, focuses on concertos, one of which, the violin concerto Lamura Cuo, is arguably the most directly evocative of Ye’s homeland. This is due to the fact that the solo line dives into what sounds like a quoted folk melody partway through, which forms the basis for subsequent development. Yet the piece began from a place of unsettling strangeness, the violin emerging out of a brooding, hovering chord, establishing a balance of melodic directness and harmonic ambiguity (here lightly suggestive of Berg) that persists throughout. Therefore the quasi-folk tune finds itself immersed in a worked-up orchestra that, while supportive of the soloist, nonetheless keeps it in check, not averse from challenging its passion with strains of lugubrious darkness. The balance i mentioned in Lamura Cuo, between directness and ambiguity, is another defining attribute of Ye’s music, which could perhaps be accurately summarised as an overall sense of equilibrium, though, happily, one that’s not afraid of embracing extremes.

This is demonstrated emphatically in both the violin and percussion concerto Mount E’mei (2016) and the piano concerto Scent of Green Mango (2014). Mount E’mei (a reference to the Chinese mountain, significant in the country’s history) is essentially all about extremes, arriving at a plateau just a few minutes into the piece and maintaining a heightened atmosphere at length, veering wildly between large-scale moments and tiny, bare responses. Ye keeps the soloists and orchestra somewhat separate (or at least discrete) from each other for much of the piece, integrating them in a boisterous sequence in its latter stages, leading to a complete polarisation between wonderfully brash, luminous chords and a massive rumbling crescendo. While Scent of Green Mango isn’t so contorted in its dramatic shifts, the attitude of the solo piano (performed here by Xiaotang Tan) is seriously intense, demonstrating a remarkably bullish, overblown lyricism that includes smashing the keyboard in crashing accents. In fact, the piano part often feels only obliquely connected to the orchestra, making for an intriguing relationship that’s perhaps not so much an equilibrium as an anxious, even tempestuous form of ongoing, barely tolerant tension. 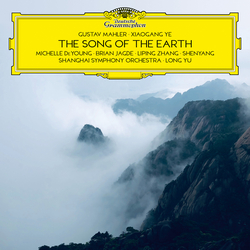 The Song of the Earth is a new double album on Deutsche Grammaphon that brings together two works bearing that name: Gustav Mahler’s 1909 vocal symphony Das Lied von der Erde and Xiaogang Ye’s response to the piece, composed in 2004. The first thing to say about this release is that the performance of the Mahler is horrendous, the worst i’ve yet encountered. That’s nothing at all to do with the Shanghai Symphony Orchestra, who generally convey a nice sense of characterful drama, and everything to do with the two soloists, mezzo Michelle DeYoung and tenor Brian Jagde, whose out-of-control vibratos render each of the six songs, at best, a nauseatingly wobbly mess, and at worst, an exercise in half-crazed, gelatinous shouting. Exacerbated by conductor Long Yu’s strangely elastic tempi, i realised by about the third or fourth song that it had essentially stopped sounding like Mahler at all and instead become something that bore a weird, distant relationship to his language, like a kind of distorted homage. Horrible.

Fortunately, while Ye’s The Song of the Earth also features six songs performed by a soprano and baritone, it isn’t plagued by the same soloists. Mahler’s texts were drawn from four Chinese poets, Li Bai, Qian Qi, Meng Haoran and Wang Wei, and for his companion work Ye has used the same poems, though where Mahler embellished and expanded upon them, Ye has left them unchanged. Textually, therefore, The Song of the Earth strongly alludes to the same core concepts and atmospheres of the Mahler, rather than being a direct duplication of them. Musically, it could hardly be more different. Ye’s language is generally impressionistic, surrounding the soloists – Liping Zhang and Shenyang – with a variety of textural environments. First impressions suggest a congenial, even lush, musical habitat but, here too, Ye undermines this by causing the soprano line to react to the opening song’s sorrow through their melody veering off in a disquieting series of glissandos, their wild contour seemingly a direct consequence of grief-stricken keening. Furthermore, the obvious passion of the soprano is confronted by a polar opposite in obtuse deep brass chords that go against this, forcing the song back to a more measured tone.

Similar equilibriums emerge in the other songs, sometimes through a friction between a rambunctious orchestra and the softness of the vocal line. This is at the heart of the fourth movement, ‘Lotus-Picking Song’, where the polarisation is a logical consequence of the different traits of the men and women in the text, though the strikingly bold manner in which Ye shifts dramatic gears tilts the song into unsettling territory, reinforced by a massive drum roll that follows towards the end. The relationship is closer in ‘Banquet at Tao Family’s Pavilion’, the soprano’s melismas not so far removed from the playfulness in the orchestra. This is also the case in ‘Feelings upon Awakening from Drunkenness on a Spring Day’ where the sleepy text is matched by appropriately whoozy music, though Ye emphasises the words’ uncomfortable conclusion by breaking apart the established atmosphere in a frantic, unexpectedly overwhelming final minute, culminating in the baritone becoming practically unhinged. Ye’s equivalent of Mahler’s ‘Der Abschied’, the much more verbosely-titled ‘Staying at Teacher’s Mountain Retreat, Awaiting a Friend in Vain – Farewell’, taps into a similarly evocative landscape of broad scope and distance. Yet while its intensity initially sounds akin to Mahler, Ye quickly passes away from this to a much less contained form of expression, unleashing such passion, even ecstasy, that the soprano line fragments in gasps and howls, before finally arriving at an equivalent place of calm, turning inward to the accompaniment of a splashy percussion fanfare over a deep tectonic rumble.

It’s a glorious performance, Long Yu and the orchestra manifesting the same extremes of emotion as soloists Liping Zhang and Shenyang, who in hindsight, i really wish had also sung the Mahler, it would have been so much better. 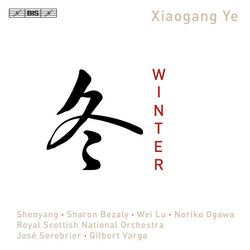 The third new disc of Ye’s music is Winter, on the BIS label, comprising three concertos and two works for voice or voices and orchestra. One of these should be instantly dismissed: Starry Sky, Ye’s last-minute contribution to the opening ceremony of the 2008 Beijing Olympics, is a stultifyingly empty exercise in superficial, crowd-pleasing, saccharine gloss. As such, it bears no meaningful relationship with anything else on either this album or the others – indeed, it’s not remotely obvious that it’s even composed by the same person. It’s a mercifully short blight on what is otherwise the best of these three new discs of Ye’s music.

i mentioned there had been faint echoes of Berg in Lamura Coa, and that also applies to the four movements of The Song of Sorrow and Gratification. Here and there one detects something of the character and harmonic wrangling of Lulu, suitable to a work exploring texts articulating a conflict between joy and mournfulness, caught between attitudes that are sombre and light. The fact that these songs are so short (3-4 minutes each) leads to the impression that their emotional content has been concentrated, resulting in extraordinary highs of beauty and lows of melancholy.

The highlights on this disc are also the two earliest works to be featured on any of these albums: the violin concerto The Brilliance of Western Liang, dating from 1983, and the orchestral work Winter, from 1988. Both pieces exploit such extreme forms of equilibrium – contrasting materials pushed to the limit in terms of polarisation – that were it not for an inherently organic sensibility their respective narratives would tip over into pure melodrama. In the case of the concerto, Ye initially makes it sound so conventionally (neo-)romantic that when a huge, highly cinematic tutti suddenly erupts it’s as if nothing whatsoever makes sense anymore – where the hell did that come from? It’s a critical moment that triggers a continual push-pull between light, dance-like forms of momentum, gently radiant tenderness (with some occasionally over-sugared moments) and similarly massive outbursts that manage to unite and confound simultaneously. i can’t quite decide whether, in Winter, Ye reigns things in a bit, or pushes them still further. There’s less sense of immensity, though the contrast between the work’s languid, even sluggish material and its various climaxes – detonations of varying yield, and a remarkable explosion of counterpoint like a dawn chorus starting up all at once – is enormous, among the most dramatically arresting (apparent) non-sequiturs you’re ever likely to hear.

Notwithstanding the couple of caveats i’ve mentioned, all three of these discs are superbly played and recorded, allowing the extremes of Xiaogang Ye’s musical language – a delirious mix of ravishing beauty and devastating weight – to speak with stunning vividness and clarity. All three are available on both CD and digital download.