The last time i wrote about a Birmingham Contemporary Music Group concert, i began the article with an observation, a complaint and a plea; this time, i’m starting with a shock and a nice surprise. The shock comes from the realisation that that previous concert took place no fewer than 21 months ago, in December 2019; i know the pandemic has caused life to be put on hold for so long but i’m still staggered to realise so much time has passed. The nice surprise is due to the fact that last Sunday’s concert exhibited none of the issues that had led to that complaint and plea: the setups between the pieces were brisk and, best of all, there was no interval whatsoever. New music, bish bosh, sorted, done, excellent.

The concert was titled ‘Mark-Anthony Turnage Concertino’ and while it also contained music by Eleanor Alberga and Rebecca Saunders, overall the evening was especially focused on Mark-Anthony Turnage, whose 60th birthday last year – mid-pandemic – is only really starting to be marked now. The occasion was also the beginning of the end for one of BCMG’s founder members, cellist Ulrich Heinen, who will be retiring after this season. The combination of being back in business again – and while this was nothing like the usual packed house for BCMG concerts, attendance was pretty strong – coupled with these commemorations meant that there was more than a whiff of celebration in the air.

In this context, it meant that Eleanor Alberga‘s On a Bat’s Back I do Fly felt especially appropriate. Titled after Ariel’s song from Shakespeare’s The Tempest, the piece initially seemed to be an essay in fast-flowing energy, but it turned out to be very much more than that. This was partly due to its subsequent dissolving into a dreamy episode of mystery and slow exploration, almost ponderous, perhaps slightly sleepy, quickly taking us far from the virtuosity of those opening minutes. Also, though, when the piece finally awoke from this power nap its re-energised state was curiously congested, the players clustered together and overlapping each other, which, coupled with their rapid movements, sounded as if everything should jam at any moment, but somehow it didn’t. The effect was fantastic, but even more so was the work’s conclusion, a sequence of events that implied Alberga perhaps didn’t really want the piece to end at all: a soft, glittering song interrupted by a splurge of additional energy quickly transformed back into soft lyricism, in turn pushed into piercing, florid spikes (so boisterous they became harsh and shrill), ending in more glitter and a collection of high whistles. Any one of these miniature behavioural moments would have been a fitting way to end the piece: all of them was even better. (Apropos: Ferneyhough once wrote a piece exploring the different ways to begin a composition; maybe Alberga should write one about all the ways to end one?!) 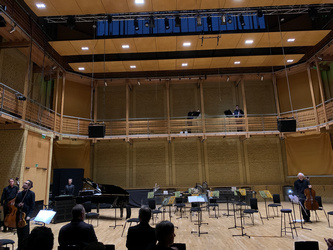 A world away from not only Alberga’s piece, but everything else in this concert (and much else besides) was Rebecca Saunders‘ Stirrings. One of Saunders’ collage works, dispersing the players to the periphery of the performance space as well as the stage, Stirrings acts as something akin to a steady state, utilising a number of what Saunders calls ‘sound surfaces’ as the substance of the work. These unfold in their own way, at their own pace, all the while raising deep and persistent questions about the extent to which one idea links to another, both within individual parts and more broadly in relation to the ensemble as a whole. Sonically, the piece is utterly timeless: a music of now; a music possibly from some ancient, primordial period; a music beamed to us from a faraway future. It acts as a mobile: like a slowly-turning object, covered in details and facets each of which is undergoing its own internal processes, actively or passively feeding into all of the others. BCMG gave it a mesmerising performance, articulating its polarised sounds – often at the limits of register – with beautiful clarity, from the most abyssal string growls and thundering harp clusters to shimmering bowed crotale notes and complex wind multiphonics. Seemingly music without a middle, this only made the work’s apparent movement around an imperceptible central fulcrum all the more captivating.

Belated birthday boy Mark-Anthony Turnage was represented by three works, two new, one old. This bringing together of music from each end of his career was fascinating, particularly inasmuch as it highlighted the continuity and consistency of Turnage’s irresistible inclination towards intense lyricism. This was fuelled by the fact that all three works were dedicated to friends of the composer. The shortest of these was a surprise miniature tribute to cellist Ulrich Heinen (who, not required to play, was able just to listen). During Uli, the CBSO Centre really should have turned the lights down low in order to match the late-night vibe of Turnage’s music, two minutes of exquisite, dark and moody melodic bliss. This Silence dates back almost 30 years, composed in 1992 and extensively revised the following year. Despite its vintage, it was instantly, unmistakeably Turnage. The first movement was shaped such that its fervent cantabile lines sat both in sympathy and antipathy with the rest of the texture. If it seemed a strange way to start a movement titled ‘Dance’, this was because the music doesn’t try to emulate particular forms or idioms, instead becoming idiosyncratically yet unquestionably dance-like as a natural outgrowth and culmination of playful behaviour. Nonetheless, BCMG and conductor Thomas Kemp strongly projected the solemnity that permeates here, reinforcing the sense that it’s the following movement, ‘Dirge’, that’s the primary trajectory of all the music in This Silence. ‘Dirge’ was so engrossing that minutes seemingly passed in moments, one becoming lost in its immersive, compelling, dark trains of lyrical thought. Its ending was genuinely spine-tingling as thin slivers of light appeared to fleck the surface of the dirge, hinting at something transcendent. 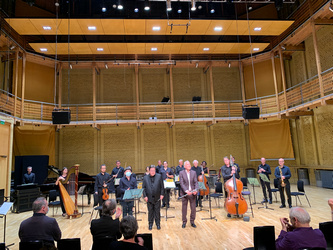 Turnage’s new Concertino, receiving its world première, was dedicated to and written for clarinettist Jon Carnac. It was the one work of Turnage’s, in two of its four movements. to veer away from overt soulfulness. The opener, ‘Study in Fifths’ had an fitting circularity to it, progressing through distinct sections while also conveying the sense of music rotating round and back again, like a form of behavioural Shepard tone. Third movement ‘Carnac’ – based on material derived from the soloist’s surname – was similarly concerned with playful musical processes, but was the only time in the evening when BCMG’s coordination went obviously awry, during a sequence of spiky accents at its conclusion.

The second and fourth movements plunged back into Turnage’s typically lush, harmonically complex soundworlds. The former, “a romanza for Jon and his partner, Annette” entered an almost pastoral lyricism, deeply intimate in character and even becoming evocative of Walton in the poignancy and sensuality of its music. The latter, ‘Sad Soliloquy’, dedicated to Carnac’s late parents, was similar in tone, avoiding obvious melancholy in favour of something more nuanced. It featured a persistent pitch running through the middle, like a tonic that could never go away, the start and end of everything, the foundation and firmament of the gentle, wandering melody and its sun-kissed, sunset harmonies.

It’s some years since i opined about what i perceived as a gradual shift in emphasis in Turnage’s music, away from the more sharp-edged, negatively-tinged or – charged music that for many typified his work. It’s a development i’ve noted in such works as Speranza, From the Wreckage, L’espoir, Hibiki, and Farewell, and the Concertino is a continuation of this. i described it back in 2014 as “a quite deliberate move towards that most disquieting concept for the avant garde, accessibility”, and while that’s perhaps over-simplifying it a little, there’s no denying that the furrow Turnage is ploughing these days is one that, while compromising nothing of the emotional weight that’s always filled and driven his music, is consistently warm and inviting.