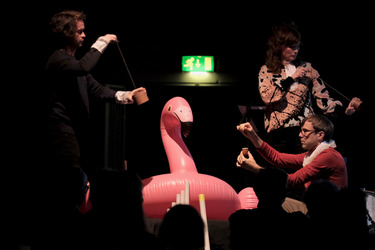 HCMF always has its fair share of unconventional, genre-defying performances, and this year was no exception. Among the more unusual was Eupepsia/Dyspepsia devised by Austrian composer Eva Reiter. Taking the form of a concert-cum-lecture (or possibly lecture-cum-concert), the focus of the work was on the socio-cultural effects wrought on Bolivia as a consequence of Spanish colonisation. Personally speaking, this is a subject somewhat close to my heart; during a month trekking in Peru some years ago i learned a great deal from the Andean people i met about the mindless, horrific ravages of the Conquistadors and their proselytizing religious accomplices. It’s a heart-breaking, tragic and brutal tale, and it was fascinating to experience Reiter’s exploration of some of the comparable effects on neighbouring Bolivia (which, for a time, was known as ‘Upper Peru’).

Performed by a trio of Reiter (primarily on viola da gamba), electric guitarist Tom Pauwels and percussionist Tom De Cock (all members of Ictus Ensemble), with narration by Anna Mendelssohn, the work flitted between examples of indigenous music, “corrupted” music showing the effects of attempted (often bowdlerised) religious assimilation, as well as contemporary works by Reiter and others reflecting on the historical events, and spoken accounts both from the time of the conquest and the present day. If there’s a criticism to be made, it’s simply that it felt as if Reiter had only scratched the surface of an important part of history. But that’s a minor quibble in what was a riveting, unpredictable exploration of the way colonisation’s impact – the product of infinite arrogance, prejudice and fear – permanently wrecks and re-writes long-standing traditions and causes wounds that take centuries even to be understood, let alone heal. It’s important to note that, though obviously deeply serious in its content, the musical performances throughout were excellent and at times amusing, especially Reiter’s rhythmically-charged, intricate interactions with Pauwels and De Cock of her own material. 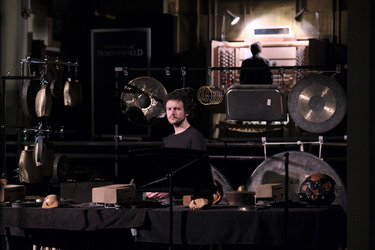 Another unusual trio came together in St Paul’s Hall on Thursday night to give the world première of Eva-Maria Houben‘s together on the way. Featuring Houben on organ, with GBSR Duo’s George Barton on percussion and Siwan Rhys on piano, the piece was a sublime example of music-making as an act of journeying, without a specific destination in mind. Echoes of Robert Louis Stevenson’s sentiment that “to travel hopefully is a better thing than to arrive”, and on the strength of this 80-minute sonic journey, it was impossible to disagree. Houben’s role provided context, laying down not merely a dronal foundation but an atmosphere, into which Barton and Rhys sporadically placed isolated gestures. The combination of these polarised but complementary ideas meant that almost every sound from percussion and piano had an implied (at least potential) significance, like small droplets falling onto the surface of a large lake. Yet this created a paradox due to the impression that, over time, no individual sound seemed to have importance in and of itself in relation to the large-scale cohesive effect. Put another way, one’s perception was repeatedly pulled between short and long durational perspectives, with both at different points and in different ways seeming less meaningful than the other. (Another consequence of this was that watching the performance felt more than usually redundant, to the extent that seeing what the players were doing seemed to actively work against appreciating its short- and long-term effect.)

This meta-ambient flexing was made more fascinating by the occasional realisation that Houben’s drones had shifted position; in practice, they were constantly on the move (in the same way that glaciers move), in the process setting up seemingly accidental episodes of diatonic lyricism and gorgeous sequences of far greater harmonic complexity, the latter of which, often containing soft shimmering or juddering pitches, created the illusion of prolonging the reverberation from Barton’s gongs and tam-tams. Our perception of time was entirely distorted: sped up during the 80 minutes of music, which went by surprisingly quickly, but then twisted the other way, slowed to a crawl, during the short silence following the end of the piece, which felt like it went on forever. Even though the piece didn’t so much arrive as “stop travelling”, i could have happily kept going in its company for a whole lot longer. 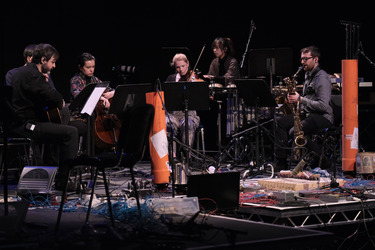 The same couldn’t really be said for Systema Naturae, an 85-minute survey by Mauro Lanza and Andrea Valle exploring a musical representation of a fictional ecosystem. Comprising four parts, focusing respectively on creatures (Regnum Animale), plant-life (Regnum Vegetabile), rocks and minerals (Regnum Lapideum) and fossils (Fossilia), the basic premise of the work was established in just the first few minutes, projecting the imaginary Latin name onto the wall while its characteristics were brought to life through a combination of live instruments and a large array of computer-controlled gadgets and gizmos. The instrumental component was performed by Explore Ensemble, and it’s worth noting how impressive it is to see how the group has developed. Just five years ago they made a brief appearance during the “Shorts” day at HCMF 2016 (giving a superb rendition of Gérard Grisey‘s Talea), and on the strength of that performance it’s hardly surprising that they should now be helming a huge multimedia work like this, or that they should recently have been awarded the Ernst von Siemens Music Foundation Ensemble Prize.

They’re a fantastic ensemble, though while their contribution to Systema Naturae was typically excellent and fastidious, it didn’t take long for both the behaviour and the musical range of the work to become overfamiliar and rather stale. That’s not to say there wasn’t a lot to enjoy in the piece, there certainly was, but the novelty of Lanza and Valle’s extensive collection of pipes, turntables, tin cans, dishes and other paraphernalia quickly wore off once they’d been called into action a few times. Perhaps it’s not surprising that a glossary-like anthropological roll call such as this should take on the quality of variations on a theme, but it meant that the most memorable moments were those that deviated from this norm, such as the strange emergence of what sounded like a children’s song created by an AI, and most of all towards the end of Fossilia, in one of the rare occasions when the musical ideas were finally allowed time to expand and develop, sounding like an exciting mash-up of Harry Partch and Frank Zappa.