Quite apart from the manifold inherent issues with which the occasion has long been afflicted, the Last Night of the Proms hasn’t exactly acquitted itself with particular brilliance as far its annual opening world premières are concerned. Consider the last few years’ efforts from Eleanor Alberga, Gavin Higgins, Anna Clyne, Peter Maxwell Davies and Jonathan Dove, and you’re looking at a list of bland, lowest-common-denominator fripperies bound for oblivion. Mark Simpson’s splendid work sparks, from the 2012 season, is a lone exception to this, and so it’s nice that it now has a worthy companion in the form of this year’s offering, Raze, from Scottish composer Tom Harrold, performed with a seat-of-the-pants ferocity by the BBC Proms Youth Ensemble with members from the BBC Symphony Orchestra conducted by Sakari Oramo. 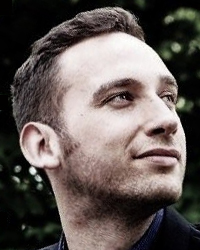 While it doesn’t break the mould durationally—more than five minutes would surely stretch the Last Night audience’s threshold for new music way beyond its tolerance—Raze is impressive in terms of how much drama Harrold packs in, with the concomitant effect that it feels considerably longer. Its thrust (and that seems exactly the right word for it) is a busy, heavyweight, gestural environment, characterised by churning inner movement within a pock-marked surface punctuated with blunt force trauma accents, governed by a more-or-less omnipresent ticking pulse. In the midst of all this, taking a pounding from every side, is a strain (again, exactly the right word) of melodic thought, initially accompanied with a nicely light-footed bassline, that proves itself doggedly persistent despite its inhospitable surroundings. The piece is more brutalist than brutal, though, exhibiting what i suppose could be called a kind of playful masochism, like a roaring fire continually trying to almost blow itself out. Harrold pushes it sufficiently far that more and more instruments become silenced for a time, leading to a sequence of sharply contrasting episodes that one senses, if pushed just a bit farther, could sunder the music permanently. But that sense of play not only keeps it together, but arrives at a full-on final minute that forges a brilliant synthesis of the work’s twin aspects, a lyrical slugfest that brings Raze to a genuinely exhilarating end. What a wonderful way to bid farewell to this year’s Proms season.

So that’s it for another year of premières at the Proms. Not, by any stretch of the imagination, a particularly inspiring or radical collection of pieces, although as usual, the few occasions when new music attained greater heights and depths, they were remarkably dizzying and profound respectively. Personally, among the world premières i’d single out those by Michael Berkeley, Malcolm Hayes, Mica Levi, Emily Howard and Tom Harrold as the pieces that hit their targets best and with the most telling impact; of the UK premières, i’ve kept returning to the pieces by Jörg Widmann, Reinbert de Leeuw, Georg Friedrich Haas and Gérard Grisey, all works with multi-faceted, long-term appeal.

But that’s just me, of course; your mileage may vary. Apropos: the Proms polls will remain open for the next two weeks, so if you haven’t yet had your say on any of this year’s premières, head over to the Proms Polls page and place your votes. In a fortnight’s time i’ll be back with a rundown of how you all voted.