This week i’ve been spending time with a couple of new albums that could each be described as being “devotional”. By that i don’t simply mean ‘religious’, although both of them are fundamentally informed by that attitude, one explicitly, the other implicitly. Listening to them has been a thought-provoking experience, raising some big questions about the relationship between audiences and so-called sacred music, about the role and function of such music, and to what extent you need to know or even care about its spiritual associations. Taken together, these albums encompass (and perhaps actively embrace) music that is by turns perfunctory, prosaic, pretentious and profound. 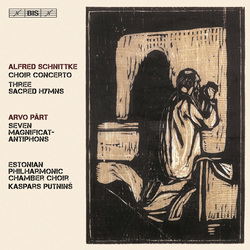 In their last exploration of the music of Alfred Schnittke and Arvo Pärt (three years ago), the Estonian Philharmonic Chamber Choir dove deeply into a mixture of intense darkness (Schnittke) and restrained light (Pärt). In their new follow-up disc, the overall tone is more equivocal, the music exploring a range of highs and lows. Pärt is represented by a mere 13 minutes of music, in the form of his 1991 setting of the Seven Magnificat Antiphons. Being directly liturgical in origin, Pärt’s approach is a rudimentary, even spare one, placing each in a dronal landscape in which the brief text is individually enunciated. Predictably, some of them are paradigms of blank dullness, though the rendition of ‘O Adonai’ is mesmerising in the choir’s beautifully clear deep male registers, the clustered density of ‘O Spross Aus Isais Wurzel’ is delicious, especially at its conclusion, and the way ‘O Morgenstern’ is kept so measured only makes it seem all the powerful (perhaps another instance of what i previously described as “inverted praise”).

Surprisingly, it’s the music by Schnittke that, despite being non-liturgical, sounds as though it’s been channelled into a solemn rite. Indeed, it’s easy to suggest that in the four movements of the Concerto for Choir (1985) the music is of far lesser importance than the words. And it’s a lot of words, Schnittke constantly having to move through them without lingering, else one imagines the piece would last twice its 40-minute duration. Rooted (like Pärt) in Orthodox manners and traditions, the work’s texts are by a mediaeval poet, Gregory of Narek, striking something of a balance between two types of earnestness, one fuelled by love (of God, as worship), the other by hate (of the self, in terms of perceived notions of ‘sinfulness’). As such, it bears a resemblance to the tone and content of Schnittke’s Psalms of Repentance, though here without plunging into anything like the same levels of abject despair and disgust

One of the most striking and effective aspects of the work is how deeply personal it all sounds. The words tend to avoid the kind of formulaic platitudes that constitute most prayers and supplications, often acknowledging a lack of understanding and / or the inability to comprehend the divine entity being addressed. (This is, of course, an integral part of Orthodoxy’s ‘via negativa’, which suggests it makes more sense to speak of what the ‘divine’ is not rather than what it is.) Schnittke uses passages like this to allow the music to wrap round on itself, as if trying to solve a complex problem, such as in the first movement where the words declare “you are unfathomable, intangible …”, at the same time tilting between uncertain minor and stronger major triads. The second movement is articulated as the litany it is, though Schnittke bestows on it streaks of gold in a number of soprano lines that float and fly over the rest of the choir’s dense, stodgy textures.

This is also a feature of the third movement, the most wordy of all – and musically the most ostensibly functional – devoted to an extensive account of how the words are intended as a kind of invocation to “lost” souls, the choir huddling together to boost their intensity, occasionally cracking with desperation, causing the harmonic clarity to rupture. If these two inner movements can feel aloof and distant, Schnittke reconnects in the ravishing closing prayer, which requests that the work’s intentions might be fulfilled, “So that my singing may become healing”. Whatever you may think, feel or believe about its sentiments and outlook, this short closing section is pure heartfelt honesty, Schnittke marshalling the choir to blast bright rays of coruscating light from earth to heaven. It’s a glory that’s echoed in the Three Sacred Hymns also on the album, most prominently in the succinct setting of the ‘Hail Mary’, which may be the most mellifluous, soft, tender and loving treatment these words have ever received.

It should go without saying, but it mustn’t: as ever, the Estonian Philharmonic Chamber Choir, once again conducted by Kaspars Putniņš, prove themselves one of the very finest choirs in the world. For the hour that this album lasts, it’s as if this is the only music that exists, and regardless whether or not you have sympathy with its dogma, the experience is nonetheless challenging and uplifting in equal measure. 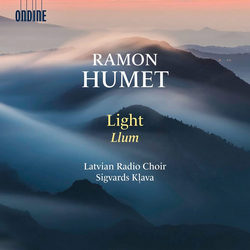 That idea of sympathy is much harder to grapple with in a new album by the Latvian Radio Choir featuring Spanish composer Ramon Humet‘s 50-minute work Light. My first contact with Humet’s music was getting on for a decade ago, with the Neu Records album Niwa, exploring a number of his chamber works. They made a luminous, even dazzling first impression, which was to an extent consolidated a few years later on Homenaje a Martha Graham (also released by Neu), where the same glittering language mingled with exuberance and elements of introspection. The music on both of those albums was, among other things, highly tangible – almost tactile, in fact – so it’s surprising to see Humet taking not so much a turn as a deep plunge into intangible territory in Light.

If that suggests the experience is a bad one, that’s not really true – at least, not necessarily. However, the imagination and invention of those other releases is answered here by a musical language that is greatly reduced and simplified, made to adhere to – or at least, never stray too far or for too long from – an underlying triadic harmonic grid. Furthermore the words, also composed by a monk, Vicenç Santamaria, avoid overt religious language in favour of more allusive adjurations and epithets (the only word that directly invokes religion is “God”, though various other words are capitalised suggesting a more lofty subtext). Depending on your own sensitivity to all things New Age, the result is either wishy-washy pseudo-spiritual flim-flam or something more meaningful that has the potential to be used as an exercise in devotion, that nature of which can be determined by each listener personally. The opening stanzas of part 1, ‘Close Your Eyes’, should hopefully clarify what i mean:

Happy and welcoming descend / to the summit of uncreated light.

Without haste or purpose / plunge to the bottomless depths.

There, open to holy reverie / become still, without anxiety.

While Humet’s music doesn’t exactly conform to the kind of ‘holy minimalism’ that has become the hackneyed firmament from which so much contemporary choral music has emerged, it does comport itself as a kind of blissed-out liturgical chant, in which ‘dissonance’ takes the recognisable form of scrunched tonality – not inappropriate in a work titled Light, coming across as it does like combined beams of colour to form various kinds of near-white intensity – and where, since the texts shy away from negative concepts and connotations, the tone of the music is that of a stream of positivity.

i’m guessing by this stage you’ve already started to decide whether you love or hate this music even before you’ve heard it, though i have to admit that, following a number of listenings, i’m still in two minds about it – which in itself i think is an interesting response. It’s impossible to deny that several of the work’s sections are really remarkable, none more so than the central movement, ‘Naked Stone’, which acts like a transfixed central point of pure radiance, becoming in this context a form of inverted apotheosis. ‘The Peaceful Heart’, which follows, blends intimacy with richness (even opulence) – though its duration (nearly 11 minutes) causes one to wonder whether it’s really possible to remain focused on or elevated by such relentless luxuriance, and whether in fact it starts to sound paradoxically dull. ‘Luminous Crumbs’ carries traces of the earlier Humet releases on Neu, embellished with brilliant metallic percussion; what makes this movement so powerful is a sequence of surges partway through that become hypnotic, though again, one can feel (not in the best sense) overwhelmed after a while. The fact that the final ‘Alleluia’ sounds exhausted seems entirely right.

The first three movements seem, in hindsight, rather flat by comparison, and they more than anything else beg the question of whether these are words and music that mean anything in and of themselves, or whether they’re intended as a kind of stimulating ’empty vessel’ that can be filled with whatever we choose (if anything) to bring to it. Furthermore, its continuous heightened state can give the impression of being all climax and no build-up, a kind of Tantric music flooded with ecstasy and avoiding any traces of normality in its hermetically-sealed zenith.

Usually, i discover what i really think about music through the act of writing about it, but in the case of Light i have to confess i’m still unsure. Does it mean anything? Perhaps that’s up to each and every one of us to decide. Either way, the Latvian Radio Choir, conducted by Sigvards Kļava, makes an utterly compelling case for the music’s power and potential.

It’s rare to come across an album where I’ve sung in two thirds of the pieces (even if together they only make up a third of the running time)! I can confirm that the Pärt is frequently just as dull to sing as to listen to (thank goodness that we now have an MD who isn’t quite so obsessed with him!), the Schnittke Hymns just as glorious. I’d truly love to lend my voice to the Concerto for Choir (for me the sheer gorgeousness of its opening gesture makes the ensuing longueurs readily forgivable), but sadly suspect that 40 minutes of near-continuous music would be a tough sell for my little band of amateurs…